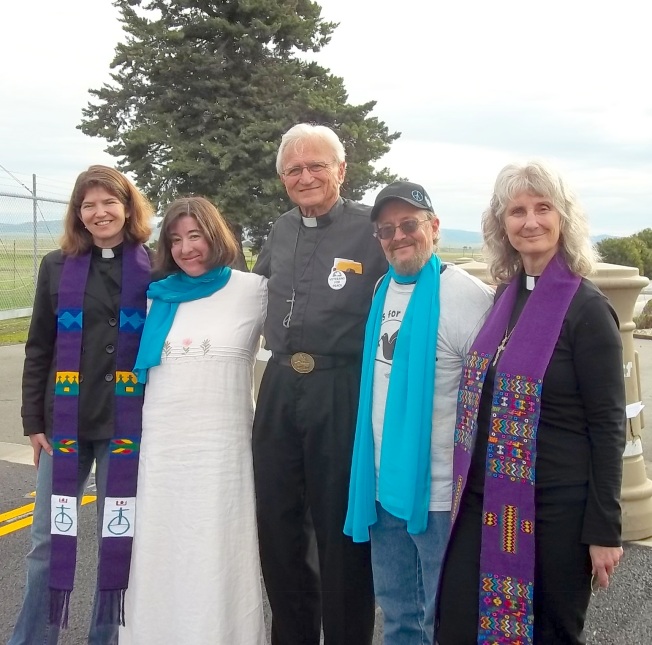 Today, on Ash Wednesday, I participated in a deeply meaningful worship service and nonviolent direct action against drones at the gate of Beale Air Force Base.  In the words of Martin Luther King, Jr., “My body is tired but my soul is rested.”  Actions of faith and conscience are good for the soul.  You can see KCRA’s coverage of the service here, and a video of the arrests here.

The worship service was exquisite.  Although today is a Christian holy day and we used traditional Christian symbols in worship, the service was unique in that it was open to and inclusive of people of all faiths and philosophies.  It included a prayer in the four directions based on Indigenous spirituality, the World Peace Prayer (from the Hindu religion), and a Hebrew song introduced by Rabbi Seth Castleman.

The service included both personal and national repentance, particularly related to U.S. militarism and drone warfare.  We celebrated Holy Communion and used ashes as a sign of repentance and mortality.  The “passing of the peace” included some people carrying the message of peace to the TV crew and Beale officers.  Several participants told me that it was the most meaningful Ash Wednesday service they had ever attended.

Following the service, five of us walked across the boundary line onto base property.  We sprinkled ashes that represented the ashes of children killed by U.S. drones.  Some of us carried crosses with artistic renditions of some of these children, with their names, ages, and countries of origin.   The other people who were arrested were:  Michael Kerr, a member of Veterans for Peace from Bay Point/Pittsburg; Flora Rodgers, a young peace activist from Linda;  The Rev. Elizabeth Griswold, pastor of Parkside Community Church (United Church of Christ) in Sacramento; and The Rev. Dr. Jerry Pedersen, a retired Lutheran pastor from Sacramento, a member of Veterans for Peace and former U.S. Marine.

We were quickly detained by Beale officers, taken to the guard station, where we were fingerprinted and photographed but not cited, then released.  When entering the guard station I greeted the officers with the words, “Peace be with you.”  We all treated each other respectfully and with good humor, with the understanding that they were doing their job and we were doing ours.  The young guards were impressed with Jerry’s military card Jerry, which shows that he was present as part of the Honor Guard on the U.S.S. Missouri during the surrender of the Japanese at the end of World War II.

As we were arrested, supporters were singing “I’ll be rested when the roll is called,” with the names of people who have worked for peace and justice through the ages.  May it be so for all of us.  May we find rest for our souls in the midst of the violence of our times.

2 thoughts on “Ash Wednesday Worship and Arrests at Beale”