Love in a time of Climate Change:  Honoring Creation, Establishing Justice was released by Fortress Press in 2017.  Love in a Time of Climate Change challenges readers to develop a faithful response to climate change, which disproportionately harms the poor, threatens future generations, and damages God’s creation.   This book’s premise is that love of God and neighbor requires us to honor creation and establish justice for our human family, for future generations, and for all creation. 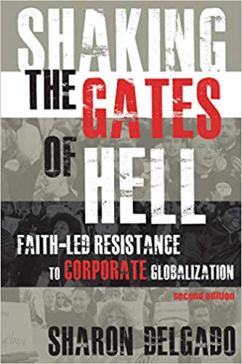 In January 2020, Fortress Press released Sharon’s revised and updated second edition of Shaking the Gates of Hell:  Faith-Led Resistance to Corporate Globalization, published originally in 2007.  This book provides an analysis of the global economy rooted in a vision of the sacredness of the earth, a radical critique of the institutions and systems that currently dominate the earth, and hope for a transformed global community.

Hope For the Earth: A Handbook for Christian Environmental Groups, published by the United Methodist General Board of Church and Society in 1994. (Out of Print)

SELECTED ARTICLES AND OTHER WRITINGS

“Love the Immigrant as Yourself,” Response Magazine, July/August 2019.

“The Spirituality of Resistance,” Sojourners Magazine, May 2018.

“Climate Justice, How Can We Make it Happen?” This is the concluding chapter for the United Methodist Women’s 2016 book, Climate Justice, A Call to Hope and Action, study guide for Mission u (formerly School of Mission).

“Market Fundamentalism:  When Money Is An Idol,” PRISM Magazine, June, 2013.

“Democracy is for People,” Response Magazine, May 2012.

“Finding Peace with Mother Earth,” A Study in the 2011 United Methodist Women Study Guide, UMC General Board of Global Ministries.

“Hearing God in the Cries of Creation,” Response Magazine, July/August 2010.

When the Storms of Life are Raging,” Response Magazine, July/August, 2009.

“Globalization from Below,” The Progressive Christian, March, 2009.

“Economic Justice:  A Light in the Darkness,” Response Magazine, January, 2009.

“The Word of God,” The Progressive Christian, July/August 2008.

“A Journey of Faith:  Toward an Environmental Justice Ministry,” Response, February 2008.

“News from the Frontlines of the Battle in Seattle,” Christian Social Action,

“Is There Hope for the Earth?” Christian Social Action Magazine, General Board of Church and Society of the United MethodistChurch, July/Aug. 1993.