If you are drawn to Jesus but have a love/hate relationship with Christianity, you’ve come to the right place…

“Maybe you love Jesus, but you struggle to reconcile Christianity’s violent historical and contemporary expressions.  Maybe you reject doctrines that celebrate Jesus’s death as a predetermined form of divine punishment that he endured “for you.” To deal with this conflict you may suspend disbelief, acknowledge or deny your discomfort, accept it as mystery, and make the best of it, because in Jesus you recognize the God of mercy and love. Fortunately, this website offers other ways to understand the story of Jesus’s death and living presence, ways that are consistent with his life and teachings, relevant for today,  and true to the overall biblical message of the gracious, forgiving, liberating, nonviolent, transforming, unconditional love of God that Jesus both revealed and proclaimed.”     Sharon Delgado 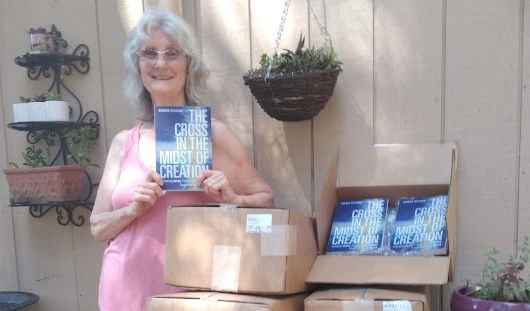 The Reverend Sharon Delgado is an ordained United Methodist minister, author, and activist.  She preaches, speaks at conferences, leads workshops, and writes on environmental and climate justice, economic globalization, and peacemaking, while pointing toward hope and action for a transformed world.  Contact Sharon to invite her to speak at your church, conference, or other event in person or via Zoom.

Sharon’s new book, The Cross in the Midst of Creation, was released by Fortress Press on June 14, and the Multi-Faith Climate Café hosted an event celebrating its launch. The followup article and video excerpts of the online Launch Day Event are available here.

Sharon’s new book, The Cross in the Midst of Creation: Following Jesus, Engaging the Powers, Transforming the World (Fortress, release date June 2022), links theologies of creation, atonement, and the biblical principalities and powers. It asserts that the crucifixion is ongoing as institutional powers diminish human life and destroy creation and that the resurrection is ongoing as faith overcomes despair and the Spirit equips people to rise in courage and follow Jesus into the heart of the struggle for a transformed world. This book critiques teachings about the cross that portray God as wrathful and draws from stories of Jesus and biblical metaphors to offer life-enhancing perspectives on this core symbol of Christian faith. It presents the cross as a symbol of God’s presence throughout creation and undying love as revealed in Jesus; also explored are the path of discipleship, the moral bankruptcy of the ruling powers, engagement through nonviolent resistance, and God’s triumph over the powers, offering hope for the world. 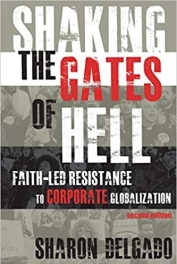 Sharon’s updated Second Edition of Shaking the Gates of Hell: Faith-Led Resistance to Corporate Globalization (Fortress Press, 2020) critiques the global economy and its effects from the perspective of an integrated theology of “the earth as primary revelation” and the institutional “powers and principalities” of this world. Explaining today’s interrelated social, economic, and ecological crises, this book makes the case that we are facing a living hell on earth if we do not address them. Delgado argues that hope lies in nonviolent resistance and creative alternatives based on God’s action in Jesus and in the triumph of God over all earthly powers. This new, revised edition continues the powerful story of the original, extending the analysis of the global economy from the 2008 collapse and recession to its alleged recovery. It addresses policies of both the Obama and Trump administrations, and provides further reflections on US domestic, foreign, and military policy in this so-called New American Century.

Sharon’s Love in a Time of Climate Change:  Honoring Creation, Establishing Justice (Fortress Press 2017) is a progressive Christian approach to climate change that respects other faiths and philosophies and takes climate science seriously.  It explores the themes of love and justice in the context of climate change from the perspective of scripture, tradition, reason, and experience.  Love in a Time of Climate Change has been endorsed by theologians, activists, and scientists, including 350.org founder Bill McKibben, climate scientist Michael Mann, theologian Catherine Keller, Interfaith Power and Light founder the Rev. Sally Bingham, and many others.