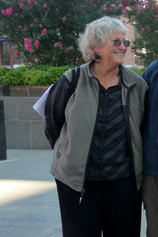 Below is the statement Jan Hartsough gave on September 9 at our sentencing hearing for our nonviolent protest against drones at Beale Air Force Base. For background on the Beale 5 case and on drone warfare, see my past blog postings on drones.

By standing at the gates of Beale Air Force Base I was joining with others to say that drone warfare is wrong. I do not believe that killing is the solution to anything.  I believe that if Americans really knew the lethal danger of drones, more people would speak out against them.  Beale is the closest base where I could stand in opposition.

Back in the mid-sixties I was a Peace Corps Volunteer in Pakistan, helping to develop educational and economic resources there.  After living and working there for two years, Pakistan is a part of me. I have followed with great pain and sadness the drone attacks on Pakistanis.  I have learned from Pakistani victims of drone strikes that they are experiencing psychological trauma – never knowing when a drone might strike again.  Kids are afraid to go to school; adults are afraid to gather for a funeral or a wedding celebration for fear of becoming a “target.”  I have also read that 75% of Pakistanis now view the U.S. more as an enemy than an ally.

Drones (unmanned aerial vehicles or UAVs) can drop bombs on targets on the ground anywhere in the world, based on information from surveillance cameras mounted on another drone.  This remote technical warfare removes the human dimension from war.  People are not meeting face to face.  It’s much more like a computer war game.  The battlefield is often in a country that we have not declared war with.  Are these drone attacks making America safer?  I believe they are just creating more enemies.

A person becomes a drone target based on their “suspicious” activities, and their associates appearing “suspicious.”  These are often called “signature strikes” when there is not a specific target – very different from the specific people whose names appear on kill lists (who are also killed by drones).  Often in drone strikes innocent bystanders are also killed, including women and children.  Is it moral to kill multiple innocent bystanders in order to kill a particular person/target?  I say unequivocally NO – killing is wrong.

So what have we accomplished with our drone attacks?  When will we wake up and see that there are much better ways to win the respect of the world’s people?

What if we spent the money currently going to develop drone warfare (and maintenance of over 800 military bases around the world) on effective economic development projects in other countries, and expanded the number of people serving in the Peace Corps?  I am sure it would do more to end the violence against the U.S. than our targeted killings by drone strikes ever could.  Each innocent killed as “collateral damage” makes us MORE enemies, not LESS – and makes us less secure as a people and a nation.

As a mother and grandmother I seek to find ways to help create a more peaceful world for future generations.  Ending drone warfare is a concrete step we can and must take.  I feel I must speak out against this new form of warfare before it’s too late.  That’s why I stood in front of Beale Air Force Base last October.

4.  The U.S. must immediately stop this lawless behavior of drone warfare that violates many international laws and treaties.

One thought on “Beale 5 Statements: Jan”