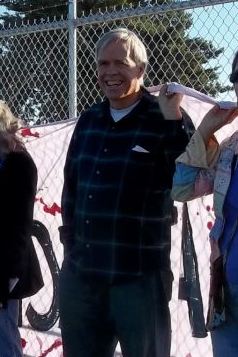 Below is the statement David Hartsough gave on September 9 at our sentencing hearing for our nonviolent protest against drones at Beale Air Force Base. For background on the Beale 5 case and on drone warfare, see my past blog postings on drones.

Drones have killed thousands of innocent civilians and are immoral and illegal under US and international law. They also recruit many more people into Al Qaeda.

We are one human family. All people in the world are children of God and are our brothers and sisters. If someone attacks our blood brother or sister, we would do everything in our power to stop them. This is the way we feel about innocent civilians being killed by drones in Afghanistan, Pakistan and Yemen.

One hundred and seventy-eight children and thousands of other civilians have been killed by drones in Pakistan and Yemen. Does this strengthen our national security? Is this making the world a safer place?

Drones are totally immoral and are against everything we have been taught in our religious Faiths: Love one another, Love your enemy and Do unto others as you would have them do unto you. This is a question of religious freedom. I am a Quaker and my religious Faith requires me to try to stop the killing of innocent people.

How would we feel if Russians or Chinese or Afghanis or Pakistanis were flying drones over the US and killing American people?

It is illegal under international law to go into another country and drop bombs on people our government doesn’t like. The Nuremberg Principles require citizens to attempt to stop crimes against humanity and killing innocent civilians is a crime against humanity. Doing nothing or remaining silent is complicity in these crimes. In protesting at Beale AFB, I was trying to uphold international law.

The United States is making decisions to kill people without them ever coming before a court or found guilty. The US government is playing Judge, Jury and Executioner. Is this what we call the rule of law?

Using drones and killing many innocent people is creating more and more enemies of the US. Every person we kill has at least 50 family members and friends who will mourn the loss of their loved ones.  Many will seek revenge on the people and nation that has killed their loved one or friend.

Instead of drones and dropping bombs on people we need to send Peace Corps people to build schools and medical clinics and help people in these countries recover from the wounds of war. We could be the most loved country on earth rather than the most hated.

By our silence we condone this senseless killing. We must speak out and act to stop this madness. By our nonviolent protest at Beale AFB, we were acting to uphold God’s law, US law, the Nuremberg Principles and international law.

We call on our fellow Americans, people in churches and synagogues and mosques, students, all people of conscience to join us in stopping Drones before they kill more innocent people and recruit more people into Al Qaeda. Unfortunately, our “war on terror” is a receipe for perpetual wars and endless suffering and death for people around the world.

Judge Carolyn Delaney, at a time when our country is preparing to reign down missiles and bombs on Syria which could start a much larger war in the Middle East killing thousands or hundreds of thousands of people, perhaps the best place for people of conscience is behind bars.

I am at peace with whatever you sentence me to.  I cannot pay a fine or accept probation for a nonviolent action in which I was trying to uphold God’s law, US law and international law. Judge, if you so decide, I am ready to do community service or spend time in prison.