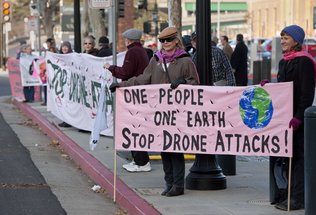 Thank you all for being here today to back us up as we go to trial for taking a stand for peace.  We come here from different places.  We have different motivations for being here, different philosophies, different spiritual traditions, but we are united in a common purpose:  to show our government and to show the public that there is strong opposition to U.S. drone warfare.

The government accuses us of breaking a civil law by trespassing onto Beale Air Force Base during an anti-drone protest last October.  I see it differently.  I crossed the line onto federal property to challenge my government’s illegal actions.  I was following a higher Law, the Law of Love.

I am a Christian and an ordained minister, a follower of the Prince of Peace.  In the United Methodist Church, at baptism we promise “to accept the freedom and power God gives us to resist evil, injustice, and oppression in whatever forms they may present themselves.”  When I crossed the line onto Beale, I was being faithful to my baptismal vows by resisting the evil, injustice, and oppression of U.S. drone warfare.

Jesus said, “Love your neighbors as yourself.”  U.S. drone strikes have killed thousands of people, many of them civilians, including children, and have injured thousands more.  These people are our neighbors.  They are being killed without trial, judge, or jury, outside of international law.

Jesus said, “Do to others as you would have them do to you.” Friends who have travelled to rural Pakistan tell about terrorized communities where U.S. drones hover overhead, where people are afraid to gather even for weddings and funerals, where terrified children are kept home from school.  US drones sometimes kill rescue workers by bombing the same target twice, making it difficult for would-be Good Samaritans to rescue victims or alleviate their suffering.

U.S. drones create more terrorists than they kill.  Violence begets violence.  Over seventy-five countries now have drones.  If the United States acts with impunity, other countries will follow our example.  What we do to others, they may in the future do to us, or to our children’s children.

I plead not guilty because I acted out of necessity, to prevent a greater harm.  I charge the U.S. government with violating international law by using drones to kill people in sovereign countries, even countries where we are not at war.  My actions at Beale were in response to these grave harms. Those of us who are U.S. citizens are complicit in our government’s actions.  The U.S. is waging drone warfare with our tax dollars and in our name.  I refuse to go along with the remote-control killing of people half a world away.  Inaction is complicity.  Silence is consent.

I crossed the line at Beale as an act of conscience and of trust in the power of Love to bring about both personal and social transformation.   I’m hopeful that our small efforts here today will be part of a great turning away from the evils of drone warfare and toward policies based on diplomacy, humanitarian concern, peace-building, and respect for international law.  May Peace and Love prevail.

For a sense of the spirit of last October’s action, watch this video from the military’s own website:  Protestors Blockade Beale AFB.

One thought on “My Statement Before Trial”