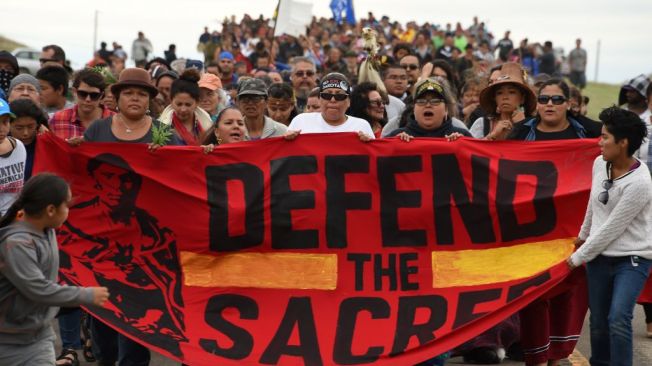 “The Earth does not belong to man; Man belongs to the Earth. This we know. All things are connected like the blood which unites one family. Whatever befalls the Earth befalls the sons of the Earth. Man did not weave the web of life, he is merely a strand in it. Whatever he does to the web, he does to himself.”        Chief Seattle

Anyone who is concerned about climate change or human rights ought to be paying close attention to the Standing Rock resistance to the Dakota Access Pipeline taking place right now in North Dakota.  Working for climate justice does not simply mean lowering our carbon footprints or sending emails to elected officials.  It also means joining together in solidarity with people who are most vulnerable to a changing climate and those who live on lands that are threatened and polluted by extreme forms of fossil fuel extraction, transport, and refining.  Such “sacrifice zones” are often on historic Indigenous lands.

Although most people know that this country is built on a history of land theft and genocide of Native peoples, relatively few realize that the historic assault on Indigenous lands continues today.  In the United States and Canada, this often takes place through the violation of treaty rights and the exploitation of Native lands by extractive industries.  Large corporations have repeatedly violated treaty rights by extracting resources and polluting traditional lands that sustained Indigenous peoples for millennia.

Members of  more than 150 Native American tribes have joined the Standing Rock Sioux Tribe in their attempts to block the $3.8 billion Dakota Access Pipeline.  The 1,172-mile, 30-inch diameter pipeline would transport 470, 000 gallons of crude oil each day from the Bakken Oil Fields. Tribe members are concerned because the pipeline would travel below the Missouri River near the Standing Rock Reservation, and a pipeline accident could contaminate their water supply. Over 2,000 Indigenous people and their supporters have gathered there, and nonviolent protesters blocking construction are being arrested each day.

The United Nations has issued a statement calling on the United States government to ensure the right of the Sioux to participate in decision-making about the pipeline, since its construction would negatively impact their rights, lives, and lands. The United Methodist General Board of Church and Society and other religious groups have made statements in support of this action.  Here’s an article with background from the United Methodist News Service:  United Methodists, Native Americans Oppose Pipeline.

People around the country are sending money, transporting supplies, and engaging in solidarity demonstrations.  This climate justice struggle is ongoing.  Donate through the Standing Rock Sioux official website. To stay updated, visit and follow the Standing Rock Sioux Facebook page.   Democracy Now is covering this action on a daily basis.

In This Changes Everything:  Capitalism vs. The Climate, Naomi Klein wrote about the importance of supporting Indigenous struggles, such as the resistance taking place at Standing Rock.  She said, “Their heroic battles are not just their people’s best chance of a healthy future… they could very well be the best chance for the rest of us to continue enjoying a climate that is hospitable to human life.”

By taking actions in solidarity with the Standing Rock Sioux, we take concrete steps toward repentance for historical wrongs against Indigenous peoples, including wrongs perpetuated under the banner of the cross by institutional Christianity.  By supporting their Camp of the Sacred Stone, we respond to calls to respect the rights of Indigenous nations and the rights of Mother Earth, while acknowledging the value of Indigenous teachings and Indigenous ways, regardless of our spiritual convictions or secular beliefs.

2 thoughts on “Standing for Standing Rock”