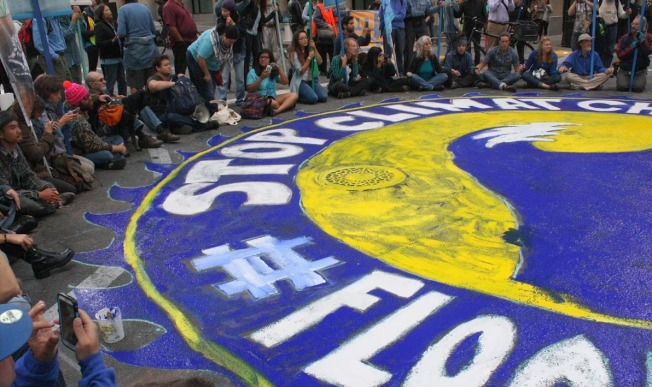 Direct Action: Flood the System, Wall Street West San Francisco Financial District. I’m the one with the gray hair. This is where the young people are–where the action is.

I was part of the United Methodist delegation to the Global Forum in Rio de Janeiro in 1992 during the United Nations Conference on Environment and Development, the first major gathering of world leaders, nongovernmental organizations, and corporate heads to focus on climate change and related issues.  Now the world is preparing for the 21st such Conference of the Parties (COP 21).  The governments of the world are still gathering, still negotiating, still talking, yet greenhouse gas emissions are accelerating, average global temperatures are rising, and extreme weather events are breaking records around the world.

The climate talks will take place from November 30 to December 11, amidst demonstrations in Paris and around the world (including here in Nevada County).  In previous climate talks, world leaders have agreed to limit emissions so that global warming will be held to no more than 2°C above pre-industrial levels in order to prevent the catastrophic consequences that scientists predict if temperatures keep rising.  Demonstrators are organizing major protests because emission limits being discussed before the Paris talks will not hold warming to that level of 2°C.  Average global temperatures have already risen .8°C (1.4°F), accompanied by record-setting extreme weather events on every continent.

Meanwhile, calls for “climate justice” are growing louder.  Everyone will be affected by climate change, but people in poor and vulnerable nations who are not responsible for historic greenhouse gas emissions are being hit first and worst by typhoons, floods, and killing droughts.  They are calling on world leaders in Paris to establish a just process for transfer of renewable technologies and payment of “climate debt.”  Youth whose futures are being foreclosed are rising up to organize direct actions and demand strong and binding action on climate change.  They are calling on negotiators to go beyond corporate-friendly systems of carbon credits and offsets (which consist of trading polluting greenhouse gases), to keep fossil fuels in the ground, and to transform the global system that is causing climate change.  People of faith and conscience on every continent are calling for those who gather in Paris to establish justice for the poor and vulnerable, intergenerational justice, and justice for all creation.

Stay tuned to this blog for more on this topic in the next couple of weeks. Keep demonstrators and negotiators in your prayers.  No matter what the outcome in Paris, this struggle will continue, and I am sure that the God who creates the beauty of the world and who is the love in our hearts is working with us for justice, peace, and the integrity of creation.

To find out more about demonstrations in your area and around the world, go to 350.org’s The Plan Through Paris.

Check out the Facebook pages of Earth Justice Ministries  and Nevada County Climate Change Coalition.for information about what’s going on in Nevada County or Northern California.