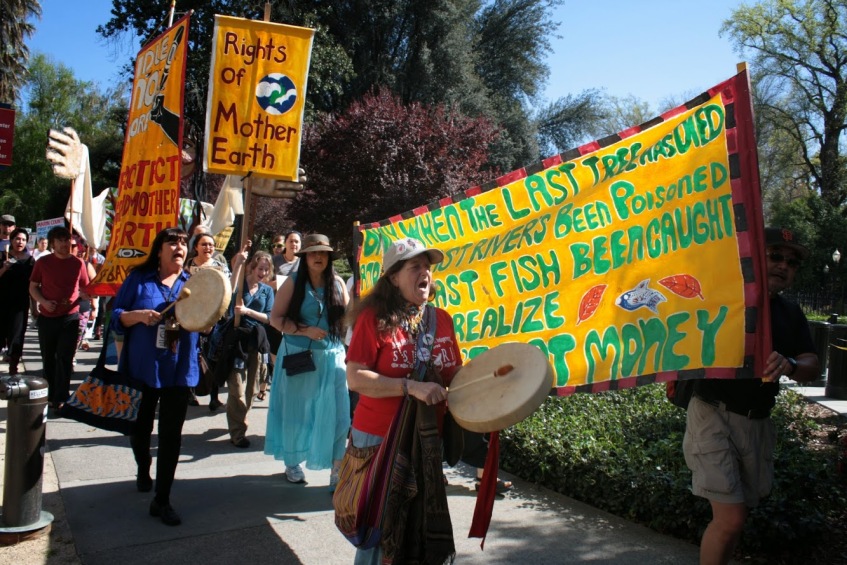 There is currently a debate among environmental activists about how to frame issues of concern.  Do we use language that will be acceptable to as many people as possible, in order to build bridges with Tea Party members and other conservatives?  Or do we speak directly to the heart of the problem of climate change and destruction of the earth, including identifying the necessity of transforming worldviews, lifestyles, and the system that is wreaking havoc all over the earth?

Clearly, I’m in favor of the latter.  I see no point in holding back, hoping that by moderating our message people who are on the other side of these issues will get on board.  It’s time to speak truth to power, expose falsehoods and denial, and pull out all the stops.  It’s time to take strong and courageous stands for the earth community and for future generations.

Today I wrote a response to a Letter to the Editor in my hometown newspaper, the Grass Valley Union.   The original letter included doublespeak commonly used by ultra-conservatives to denigrate environmental issues and concern for the common good.    Here is my response:

“James Butler’s March 14th letter about the suction dredge mining ban included examples of doublespeak, or  “language used to deceive, usually through concealment or misrepresentation of truth.”   Mr. Butler may not realize it, but here are the misrepresentations:

“Agenda 21 can’t “dictate” anything.  It is a non-binding set of principles developed through the United Nations in a participatory process .  The guidelines are completely voluntary and unenforceable.

“The idea that our local government is “forcing UN socialist ideas down our throats under the guise of protecting the environment” is ludicrous.  Many locals want to protect the environment and rural quality of Nevada County.  The United Nations is not “socialist,” but includes countries with capitalist, socialist, and mixed economies.  Calling “sustainability” and “common good” buzz words doesn’t take away their actual meanings, which are positive.

“Our democracy faces many very real challenges, including the Citizens United Supreme Court decision, the pending “McCutcheon” decision, and the Trans-Pacific Partnership (TPP), which is binding and would give secret tribunals power  to overturn our democratically enacted laws.  These are bad for sustainability, bad for the common good, bad for democracy.

“Confusion, obfuscation, and deliberate misrepresentation are the last things we need.”

I have written more extensively on the issue in a previous blog posting called Agenda 21 vs. the TPP.