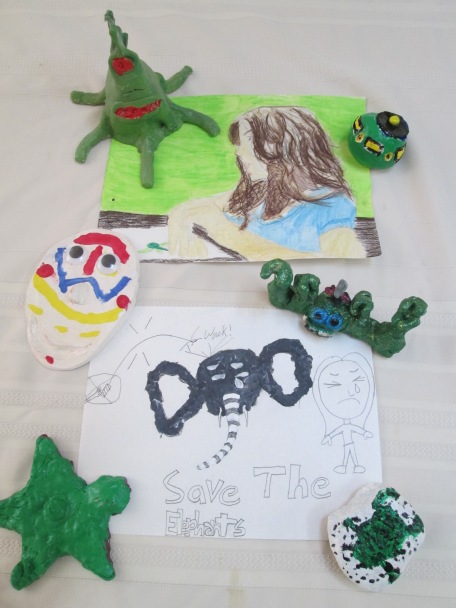 Several of my grandchildren have art work that will be entered in the Nevada County Fair, which is coming up in a couple of weeks.  One of the drawings has the words “Save the Elephants,” along with a picture of both an elephant and a child in tears as the elephant is “wacked.”

Our community is in an uproar because the fair board has contracted with a company called Have Trunk Will Travel, Inc. to provide elephant rides at the fair.  Videos are circulating that show company trainers abusing the elephants, including a baby elephant.  Community members have urged the fair board to cancel the contract, to no avail, and are now vowing to protest at the fair.    Meetings are being held, stickers and flyers are being created, T-shirts are being designed.  The goal?  To dissuade people from riding the elephants and prevent Have Trunk Will Travel from making a profit in this community.

This organizing effort is an example of people awakening to harm being done to another species, recognizing how we are complicit if we stay silent, and choosing to organize and take action with others to bring change–in this case to end the abuse and exploitation of elephants.  It’s also an example of a conflict of values–what do we value as a society?  Are other creatures to be used solely at the pleasure of human beings?  Is money really the bottom line?

I hear people in this community saying “No!”  It’s not okay to capture, subdue, and abuse elephants or other wild animals for the sake of entertainment and profit.  They have intrinsic value and are part of the interrelated web of life.  Elephants, especially, are known to have an emotional life and deep familial bonds.  Elephants have feelings, too.

By recognizing these realities, we glimpse Love, the Source of life, which connects us with each other, with elephants, and with all other parts of creation.  As Albert Einstein said, “Extend your compassion to all living things.”

3 thoughts on “Elephants Have Feelings, Too”