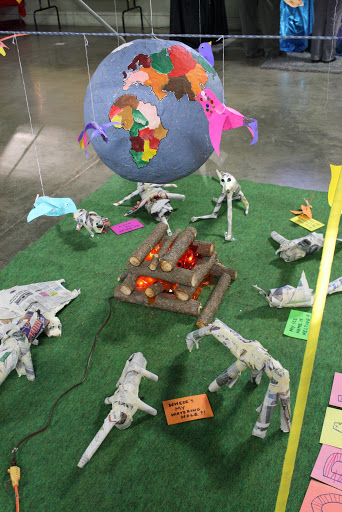 The reality of human-induced climate change is a matter of scientific consensus, yet the topic is presented in the media as controversial.  How can this be?

Since 2000, we have experienced nine of the ten hottest years ever recorded.  The 12-month period from July 2011 through July 2012 was the hottest on record, and featured tens of thousands of record-setting extreme weather events consistent with climate change predictions.  These included brutal heat waves, droughts, wildfires, hurricanes, tornados, and severe storms.  By  August 2012, more than half of U.S. counties had been designated disaster zones because of drought, with widespread crop failures.

All national and international scientific academies and societies agree with the assessment from the Intergovernmental Panel on Climate Change (IPCC), which states:   “An increasing body of observations gives a collective picture of a warming world and other changes in the climate system… There is new and stronger evidence that most of the warming observed over the last 50 years is attributable to human activities.”

The controversy about climate change is not scientific, but political and ideological.  Oil, gas, and other companies that profit from fossil fuels deliberately sow doubt about climate change while lobbying public officials against regulation of their industry.  This energy lobby spends millions to dismiss global warming, downplay its significance, and deny that it is caused by human behavior.

Furthermore, the Religious Right is linking denial of climate-change to religious faith.  The cynically-named Cornwall Alliance for the Stewardship of Creation has issued “An Evangelical Declaration on Global Warming” that includes the following:  “We deny that Earth and its ecosystems are the fragile and unstable products of chance, and particularly that Earth’s climate system is vulnerable to dangerous alteration because of minuscule changes in atmospheric chemistry. Recent warming was neither abnormally large nor abnormally rapid. There is no convincing scientific evidence that human contribution to greenhouse gases is causing dangerous global warming.”

One of my primary reasons for writing is to alert people to the fact that we face a living hell on earth if we don’t turn around as a species.  As human beings living in this critical time, we are called to resist domination by institutions and ideologies that leave us feeling confused and powerless, exercise our God-given intelligence and freedom, and create new systems that are life-supporting.   We can join with 350.org and other grassroots organizations that are taking action to reduce greenhouse gas emissions by changing public policies.  We can also bring this conversation into our churches and other faith communities so people do not fall prey to anti-science ideologies.

The weight of the evidence and scientific consensus show us that human-created climate change is not just theory, it’s fact.   Climate change is real, it’s here, it’s worse than we thought, and we must take decisive action now, for the sake of our grandchildren’s children and for all of God’s beloved creation.