Today’s bench trial took the whole day.  The rally outside was inspiring and the courtroom was full of supporters.  We had a great team of pro-bono lawyers and interns who worked hard to try to bring in a “not-guilty” verdict, while also giving each of us the opportunity to testify about our motivations for our nonviolent direct action at Beale.

I’ll be writing more about the trial after I’ve had time to process this experience, but for now I’m going to go out and watch the meteor showers.  Our sentencing will take place on September 9th.  I’m feeling calm and positive.  Thank you for your prayers.

Below is today’s press release, from Cres Velluchi of the National Lawyers Guild, who has helped us so much.  Thank you, Cres!

SACRAMENTO – Five peace advocates protesting against the Obama Administration’s use of killer drones and killings of innocent civilians, including children, around the world were found guilty late Monday in U.S. District Court here of trespassing.

The so-called “Beale 5” were arrested Oct. 30, 2012 at the main gate to Beale AFB, where the Global Hawk drone is based. It flies surveillance for lethal predator drones.

The guilty verdict – handed down by federal judge Carolyn K. Delaney late Monday – means a possible fine and/or up to six months in federal prison. Sentencing is set for Sept. 9.

All the defendants have said they will not pay a fine or accept probation.

The court refused to allow the defense of necessity or the Nuremberg defense, which provides that a citizen is complicit in the killing of civilians – as in the drone strikes – if they do not protest or try to stop that killing by their government.

Cindy Sheehan and about 50 peace advocates from Northern California attended the trial.

The defendants were represented by volunteer lawyers coordinated by the National Lawyers Guild of Sacramento, which said the government also denied defendants a jury trial, even though they could be sentenced to six months in prison.

A second anti-drone trial is scheduled later this year for another group of five people arrested at Beale AFB this past April 30. 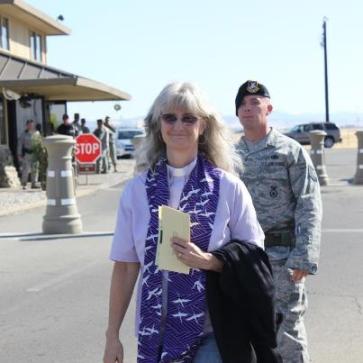 Last October, I was arrested for civil disobedience with eight other people during an anti-drone demonstration at Beale Air Force Base.  Charges were dropped against four of my co-defendants.  The case against the remaining five of us continues.

Our trial will be held on August 12 in federal court in Sacramento.  We had hoped to make our case before a jury, but on Thursday U.S. Magistrate Judge Carolyn K. Delaney denied our lawyers’ request for a jury trial.  In other words, we will not be able to testify before a jury of our peers, some of whom might be sympathetic to our reasons for taking the action we did at Beale.  Instead, we will be tried before Judge Delaney, a representative of the very system that charged us with misdemeanor trespass for publicly challenging its drone warfare program.  Although we each face up to six months in federal prison, $5000 in fines, and five years’ probation, our case does not qualify as serious enough to warrant a jury trial.

Nor will we be able to explain why we found it necessary to break the law by trespassing a few feet onto Beale Air Force Base property.  Judge Delaney granted the prosecutor’s motion to disallow “the necessity defense,” that is, a defense based on taking action to prevent a greater harm.  By denying us the necessity defense, the judge prevents us from testifying about our motivation, which was to interfere with, call attention to, and prevent the grave harm taking place through the U.S. drone warfare program.

A bit of good news:  the judge’s ruling resulted in a front-page article in the Sacramento Bee, which I hope helps to open peoples’ eyes to the issue of drone warfare (which was the intent of our action at Beale) and to the eroding of our constitutional rights.  See the full Bee article here.

I don’t relish the idea of being locked away.  I’d rather be here among the trees, watching the birds, and playing with my grandkids.  But at what price?  I refuse to go into denial about the far-away families, not that different from my own family, where U.S. drones hover overhead, threatening and delivering death in my name, with my tax dollars, and (supposedly) for my benefit and security.  The only way I can face this reality and be at peace with myself is by taking a stand against the policies and institutions that perpetuate such killings.

I understand why people in this country want to keep a low profile, especially now, considering the NSA surveillance program and the targeting of whistleblowers like Bradley Manning and Edward Snowden.  The whole point of such policies is to use threat and violence to engender fear and unquestioning obedience to the domination system.  That is what Empire does when it has lost its legitimacy.

But the more of us who speak out and take a stand, the more hope there is for transformation.  In “Naming, Masking, and Engaging the Powers,” an excerpt from Shaking the Gates of Hell, I write:

“When we refuse to live in fear of and obedience to the Powers, their stratagems no longer work. When the Powers can no longer count on fear, selfishness, and apathy to keep us in line, they cannot do business as usual.

“For engaging the Powers exposes not only their evil effects, but also their folly. When we refuse to live in denial and instead speak truth to Power, the lies and pretensions of the Powers are exposed. When we challenge their morality, the Powers lose their legitimacy. When we choose lifestyles that reflect creative, life-giving values, the Powers lose their ability to dominate culture. When we enter actively into solidarity with the poor and oppressed, with victims of war and unjust economic policies, the brutality of the Powers is exposed. When we take part in organized actions of nonviolent resistance, the futility of their attempts to rule through domination is exposed. When we refuse to live in fear and are willing risk even death, as Jesus did, the ability of the ruling Powers to govern life through violence and intimidation is lost and the triumph of God’s love is revealed.”

I pray that whatever comes, I can witness to the transforming power of the God of love.

Check here for past blog postings related to the Beale anti-drone case.