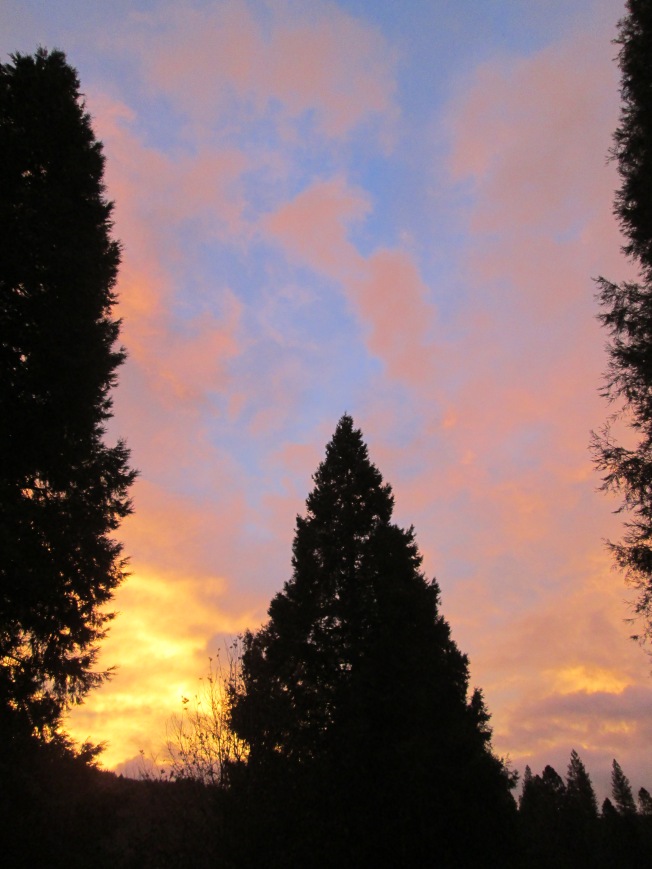 A recent view from my front deck.

This is my third day of recuperation from knee surgery—miniscus repair.  I’m resting and reading, getting good care from Guari, making my way around on a walker.

This “time off” couldn’t have come at a better time.  These past months I’ve been going through a transformative period in my life, and now… I’m doing one thing at a time, slowly, and following it through to the end—a great practice.  In addition to entrusting family members and the world to God’s care, my meditation and prayer have been deeply impacted, for days now, by my re-reading The Joy of Living by Yongey Mingyur Rimpoche.  He presents the basics of Buddhist teachings and relates them to the cutting edge of neuroscience in elegantly simple language.

I’m so ready for this further breakthrough that I feel myself going through—if only I can stay true to myself and to “what is”—the Absolute, Truth, the Great Mystery, the Dharma, the Tao, the Holy Spirit, the Mind of Christ, Love, God.  No, these words don’t all mean the same thing.  Each tradition offers unique insights and points to unique experiences.  But they are all ways of trying to express the Ineffable, the Ground of Being through which all things come and go.

I’m feeling profoundly grateful.  A song we sang at a recent singing circle expresses it well:

“A million tomorrows shall all pass away, ere I forget all the joy that is mine today.”

In this week or so before Christmas, I’ve been very much involved with family and friends.  I’ve been to two pageants, the Nutcracker, family gatherings, a song circle, a Solstice potluck with friends, and birthday celebrations-with more to come.  I am re-posting this message, Seasonal Antidotes to Consumer Culture, from last December 21, relevant again this year on these days before Christmas:

On Sunday the children of our church performed a Christmas pageant, complete with Mary, Joseph, angels, shepherds, wise ones, sheep, and a talking donkey.  The children sang Christmas carols and at times the congregation sang along.

As I mentioned in my last blog post, The Revolutionary Stories of Baby Jesus, the biblical stories of Jesus’ birth and infancy have political and even revolutionary significance.  They are stories about a man and his unwed pregnant fiancé, forced by the State to travel a long distance to register for the census in Bethlehem.  The couple spends the night in a stable because that is the only place offered to them, and the young woman gives birth there.    Lowly shepherds see visions of angels and celebrate the birth of the baby, whose only bed is a feeding trough.  Later, foreign astrologers or “wise ones” spot a significant star and follow it, in search of the Christ child.

Our pageant ends with all the children singing “Joy to the World.”  They don’t act out the painful parts of the story:  how the wise ones go to Jerusalem, talk to King Herod, raise his suspicions and outsmart him, while setting into motion a chain of events that leads to a massacre of innocent children (sound familiar?) and the flight of the holy family into Egypt, where, homeless, they struggle to survive as political refugees.

But these painful parts of the story are there, and the kids learn them soon enough.  And whether you understand the story as history or as legend, it is a reminder of the hope that “another world is possible,” the hope of “peace on earth, good will to all people.” It is also a reminder that the Ruling Powers of this world are directly at odds with the incarnation of peace, love, hope, and joy.  This is just as true now as it was in Jesus’ day.

Take, for instance, this Toys R Us ad, which deliberately attempts to lure children away from their natural love of creation and to seduce them into a corporate-constructed “world” of greed and consumption.  This ad and others that target our children seek to instill in them a sense of entitlement, self-centeredness, greed, and lust for things, values which bring not joy but spiritual harm.  In fact these negative values, which underlie our consumer-oriented culture, contribute to poverty, inequity, and ecological damage that threatens life and the future.

Christmas pageants and other non-materialistic holiday and seasonal celebrations provide an antidote to the seductions and demands of consumer culture.  They teach spiritual values such as humility, gratitude, generosity, community, peace, love, and joy.  They “incarnate” the reality of God with us.  They point to light in the midst of the darkness and to life in the midst of death.’