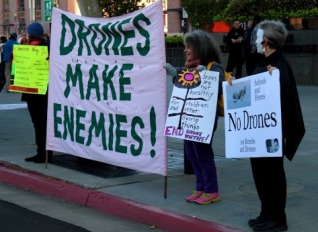 I appeared in federal court again yesterday for engaging in civil disobedience with four others during an anti-drone action at Beale Air Force Base last October.  This time we were in court  facing Judge Katherine K. Delaney in order to set a new trial date.  This is no small effort, since so many people will need to be there for the trial:  government prosecutors, witnesses from the base, five defendants (including me), and five defense lawyers, one for each of us.  It took some juggling of schedules to arrive at a date that would work for all of us.

The date finally agreed upon is August 12.  Several motions will be filed before then, by both the defense and the prosecution.

A prosecutor stated that he will put forth a motion to bar “the necessity defense.”  If the judge rules in his favor on this motion, it will be more difficult for us to build the case that we risked arrest because it was necessary in order to prevent a greater harm (that is, the deaths of thousands in drone strikes).

Our defense lawyers plan to request a jury trial.  The judge could agree to this, but since our charge, misdemeanor trespass, carries a penalty of no more than six months of jail time, she is under no obligation to do so.  Our lawyers are also hoping to call expert witnesses to testify about the threat posed by drones.  We were heartened to hear that on April 24th, the judge in the Transform Now Plowshares case allowed expert testimony from former Attorney General Ramsey Clark.  Read the remarkable transcript of his testimony here.

It seems to me that people are waking up to the reality that there’s something cowardly, inhuman, and just plain wrong with illegal targeted assassinations by remote-control killer drones.  U.S. drones have killed thousands of people, mostly civilians, including hundreds of children. We are creating enemies, making our world less secure.  Over fifty countries now have drones.  If we use drones for targeted killings, other countries will be emboldened to follow our example and use them, too.

I trust that the tide of public opinion is turning against support for the U.S. drone warfare program.  I’m grateful for the opportunity to be a small wave in the larger ocean, filled with wave upon wave of people working together to change the direction of the tide.

Courtrooms can be boring, dry, and depressing, but as I sat in court yesterday, I experienced the presence of God.  We have no idea what God can do when we take a stand for justice, big or small.  As I sat there in the courtroom there was no place I would rather be.

2 thoughts on “In Court for Anti-Drone Action”